Where Beavers, Cubs and Scouts learn and have fun

Due to a serious ingress of Water, the Scout head quarters had to close down in 2011.  This page shows the history of the project to re-decorate and refit the hall 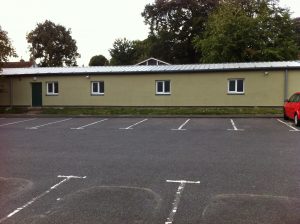 Scout headquarters from the car park

The main building project completed at the beginning of August!

From the picture you can see that the new external insulation and light green concrete/polymer render is complete, you can just about see the new insulated steel roof and the double glazed windows

Also finished but not visible is the rewiring, new toilets, and new internal entrance room/meeting room/stores at the back of the building 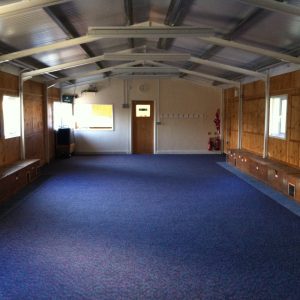 Thanks to Tesco Development Team’s generosity, contractors  fitted heaters, some new internal walls, a new kitchen, carpets and tiled flooring, and the Development Team members travelled from all over the country and painted whole sections of the HQ, and planted new gardens around two sides of the building.

New CCTV, fire detection and security systems as well as wifi, were also fitted with the assistance and cooperation of Bill Morris, the Parish Council Chairman, and funding from County Council Chairman Richard Smith.

Netherdown Developments and CSS groundworks contractors have installed the new access and disabled ramp, part funded by a grant from the Gibson Trust. 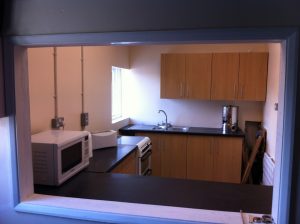 We have also received over £9,000 in a Lottery Fund “Awards for All” grant, which has bought a new cooker and fridge, and tables and chairs, and will buy racking and new cupboards, as well as new camping equipment.

Further internal wall upgrading, false ceilings and rails to the disabled ramp, plus more painting, should be completed or largely finished by the Opening Celebration on the 4th October (see below).

The 1st Welwyn Scout Group HQ, named Derek Nash Scout HQ, was officially opened on the 4th October.  This is honour of Derek Nash who dedicated almost 60 years to scouting, with 30 of those years in Welwyn, when the Group was the largest in the District, numbering almost 200 young people.

He also lead and supported scouting in the USA, Russia, at County and national level, a better example of what scouts stands for cannot be found than Derek, who died a few years ago having retired from scouts.

Scout sections expanding and other new users attracted to the HQ

By late 2014 The new village facility had already begun to attract increased numbers to the scout sections, with around 20 beavers and 10 cubs meeting regularly.

Over the coming weeks the Welwyn Wailers, a local arts group, and other uniformed groups began to use the hall.

We want our great new facility to again become an integral part of the community, as it has been since 1908, now the Welwyn Hatfield Council have agreed to grant a new lease to 2140, giving us security well into the next century! 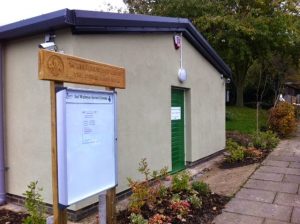 Picture of wood carving behind the scout hut

Overall, around £115,000 was spent on the refit, and in addition we received the equivalent of £25-30,000 of free labour and materials from Tesco, Netherdown Developments, EDF Energy and GSK, and lots of individuals, which was crucial in making the HQ look fully modernised, warm and welcoming, as seen in the photographs.

This photo shows the beautiful carved wooden plaque produced by Dave “Woodie” Wood of 6th WGC Scout Group to show that the renamed 1st Welwyn Scout Group “Derek Nash Hall” is open for use by beavers, cubs, brownies and scouts since September 2014.